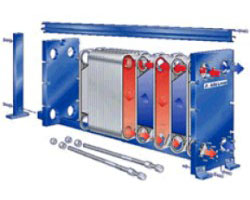 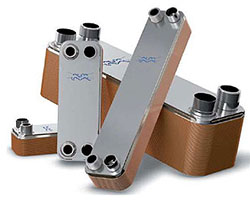 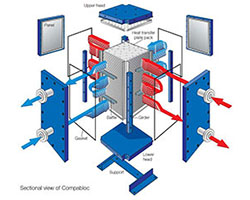 Welded Plate Heat Exchangers use a welded process to weld the plates together. Since no gaskets… 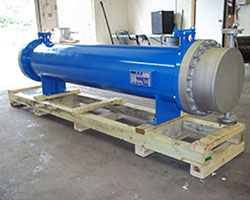 Shell and Tube Heat Exchangersuse a set of tubes installed in a cylindrical shell. One fluid flows in the tubes…

What is a Heat Exchanger?

A heat exchanger is a device for transferring heat from one medium to another. It does this in several ways, each of which has its own advantages and drawbacks. In each and every case, the transfer of heat takes place even though the two mediums never mix with one another. In a typical heat exchanger, one medium, i.e., water, enters the heat exchanger at a certain place at a certain temperature. The other medium, also water, enters the heat exchanger from a different location at a different temperature than the first. Regardless of what function the heat exchanger fulfills, in order to transfer heat, the fluids involved must be at different temperatures and they must come into thermal contact. And in accordance with the second law of thermodynamics, heat cannot of itself pass from a colder body to a hotter body. It will always move from the hotter to the cooler medium.

Flow Pattern: There are three typical flow arrangements to consider: parallel, counter and cross flow. Parallel and counter flow patterns are both in line flow patterns: two fluid streams flow in the same direction or in the opposite directions.

In this heat exchangers, the fluids travel perpendicular to one another through the exchanger, i.e., one fluid flows through tubes and the second fluid passes around the tubes at 90° angle. These units are usually found in applications where one of the fluids changes state. An example is a steam system’s condenser, where the steam exiting the turbine enters the condenser shell side, and the cool water flowing in the tubes absorbs the heat from the steam, condensing it into water.

While the fluids in a shell and tube heat exchanger are separated by a series of finned tubes, the fluids in a plate heat exchanger are separated by plates with very large surface area. This plate type arrangement is more efficient than the shell and tube and is mostly used when temperature and pressure demands are not that great. Its only weakness is the gaskets themselves. Advances in gasket technology, however, have made the plate type increasingly practical. When it comes to flow arrangements, all three flow patters have their advantages and disadvantages. But of the three, the counter flow design is the most efficient when comparing heat transfer rate per unit surface area.

Fouling – one of the most serious problems that you will face with heat exchangers is fouling. Whenever you use a natural source of water as your cooling medium, i.e., lake, a lot of biological and human debris will enter the heat exchanger and build layers, decreasing the heat transfer coefficient.

Scale – another possible problem is scale, which is chemical deposit layers such as calcium carbonate or magnesium carbonate. Plate heat exchangers need to be taken apart to be cleaned, while shell and tube heat exchangers can be cleaned using acid, bullet cleaning etc. In a large scale operation, water treatment such as purification, addition of chemicals, and testing, can minimize fouling. 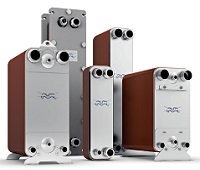 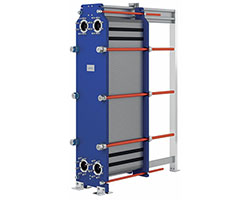 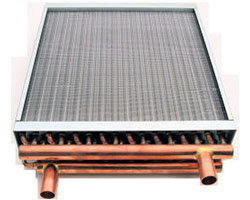 Shell and Tube Heat Exchangers use a set of tubes installed in a cylindrical shell. One  … 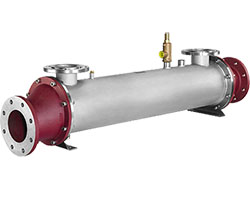 remove thermal energy from the exhaust gas,These heat exchangers are designed to of natural… 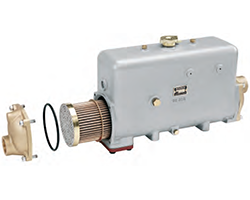 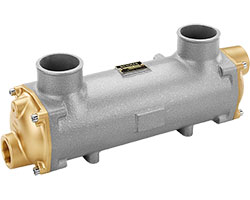 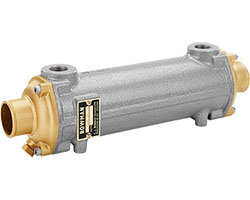 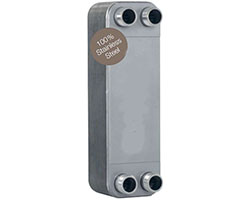 Alfa Laval HEXpert makes it quicker than ever to get the product and application knowledge you need to find your ideal heat exchanger. Just answer a few short questions and get a customized recommendation to meet your unique needs. The tool currently covers products for design pressures up to 100 bar and design temperatures up to 450° C.