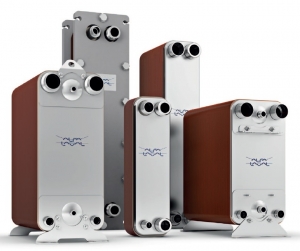 The Brazed Plate Refrigeration Heat Exchanger  is the most efficient and compact heat exchanger for refrigeration applications. They can be supplied in single and dual circuits designs for evaporator and condenser applications.

DESIGN
The Brazed Plate Refrigeration Heat Exchanger is a variant of the traditional Gasketed Plate Heat Exchanger. It is composed to a number of ‘herringbone’ corrugated Type 316 stainless steel plates brazed together in a vacuum furnace to create a bond that allows it to operate at pressures over 600 psig. Advantages of BRAZED PLATE over other technologies